Mostly known as nourishment for creatures further up the food chain, sardines don’t get their due. But forget Omega-3 fatty acids and varnish. We’re talking up-tempo hot jazz of the sort that has you mimicking 50’s Sinatra, the irrepressible “finger-snapping hipster.”

The music in question is from an earlier era, say the 20’s and 30’s, but don’t let the mere passage of time slow you down. The hot jazz artists known as The Hot Sardines swam into town on waves powered by French Fries and Champagne (Universal Music Classics), not coincidentally the title of their latest album.

The heat was on, the tempo was up, and the group lived up to the standard set by their pedigreed producer, Eli Wolf (Norah Jones, Elvis Costello). 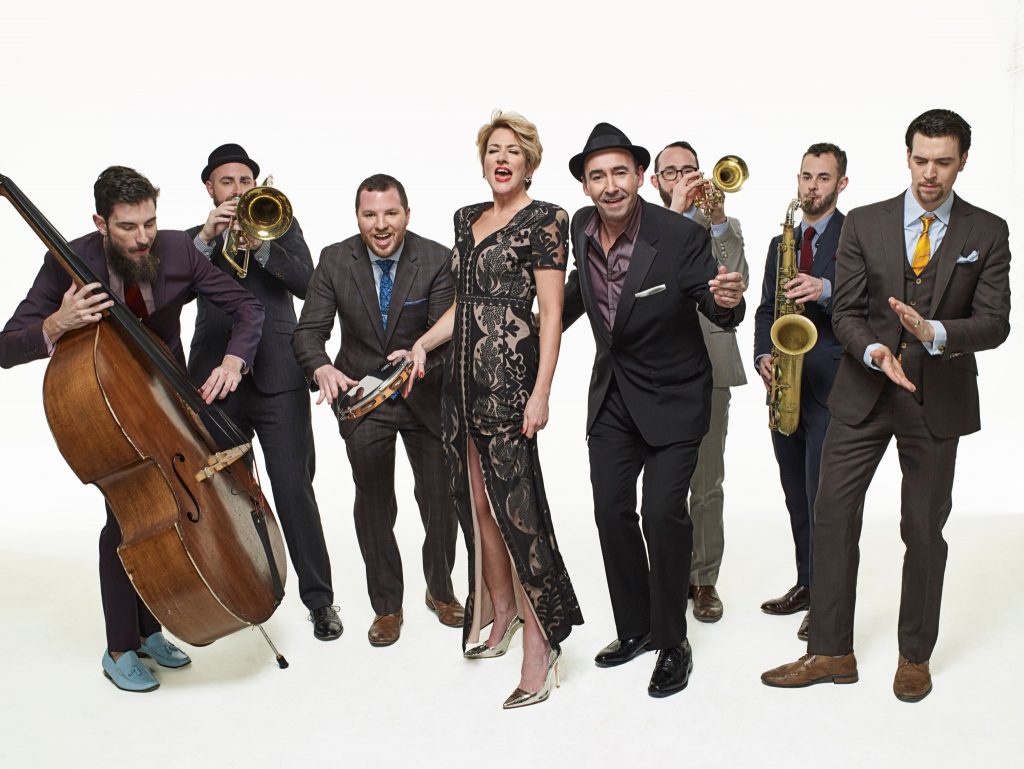 The all-male, narrow-tie look was tailored (except perhaps Mr. “Sugar” Crane’s impressive beard) and well-manicured, but the sound was even more so: tight and fast. Credit artistic co-director and keyboardist Evan Palazzo; the discipline paid immediate benefits. Even before vocalist Elizabeth Bougerol made her glamorous, front-woman entrance in black dress and heels, a musical tap-studded gauntlet had been thrown down.

How would the vocalist fit into this accomplished mix? 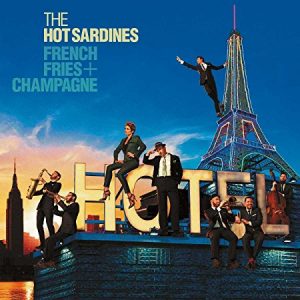 The wind trio of Mike Sailors, Jason Prover and Nick Myers was an outstanding addition to the arrangements, despite the show-stealing tap footwork of provided by “Fast Eddy” Francisco. The group’s solid musicianship and Palazzo-arranged phrases gave the ensemble’s interludes of improvisation the well-primed trellis the genre needs.

Hot Sardines gave this audience some standout covers of “I Wish I Could Shimmy Like My Sister Kate,” Cole Porter’s “I Love Paris,” “Royal Garden Blues” (with a Krupa-esque drum solo), Billie Holiday’s “Them There Eyes,” “Crazy Rhythm” (featuring the still-apt line, “What’s the use of prohibition?”).

Much love was showered on the standout tap work of Mr. Francisco, and more than one adoring female audience member was heard to croon approval. Ms. Bougerol acknowledged this, remembering Tommy Tune’s revival of the form – perhaps unaware that Mr. Tune had appeared at the Landmark only last season.

Trivia Question  What artist who also appeared at Landmark in 2016 is featured in a Hot Sardines song from French Fries & Champagne?

The future for Hot Sardines is bright – brighter than for their oceangoing counterparts.

Elizabeth Bougerol has yet to come fully into her own with more deeply lyrical  – yet still steamy – vocal performances. The arrangements, already strong, could highlight even more the swing and swagger of the era.

The Landmark was built in 1908. While it started life as a school, over the years its halls surely rang out from time to time with period swing or ragtime song.  The Hot Sardines revived a history lesson in these halls, a lesson packing many a longing backward glance at Fats Waller and Louis Armstrong.

For those who pine for those fatty acid-packing cans, fear no more.  Canned heat is back in a new form.

So if you’re feeling down and cold, buy or click on the video version of “When I Get Low I Get High.”  The song is probably the Hot Sardines’ hottest to date.

A simple finger-snap
will crack the coldest snap
this Long, Long Island can throw at you.

Live or streamed, the temperature is high and can only get, well, higher.

This is where the poem wins me back,

especially the lines spoken in the voice of the mouse.

I mean we’ve all seen these images in cartoons before,

but I still love the details he uses

when he’s describing where he lives.

The perfect little arch of an entrance in the baseboard,

the bed made out of a curled-back sardine can,

the spool of thread for a table.

from “Workshop” by Billy Collins