“I loved him as Eli Gold in The Good Wife.”

“He was great as Nightcrawler in X2: X-Men United.”

“Creepily sexual as Master of Ceremonies in Cabaret on Broadway.”

“I look forward to his crisp introductions on Masterpiece Theater.”

“He had me at Emma.  The perfect Jane Austin’s Mr. Elton.”

“His memoir Not My Father’s Son was gutsy and articulate.”

These were just a few of the comments heard while threading a path through the sellout crowd at Landmark on Main Street last week. 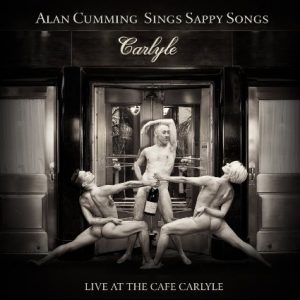 As if to assess whether he had the full attention of his audience, he added “The Climb” by no less than Miley Cyrus, and “La Complainte de la Butte” by Jean Renoir, sung in what this reviewer was persuaded had to be perfect French.

The arrangements were tasteful and un-loungelike. Often the cello parts were allowed to surface and swell unguided. Or longer, bowed notes paralleled Cumming’s lower register. Other times, Horne‘s arrangement let the harmony spin out, then resolve itself by taking up a satisfying residence on the cello’s C string — that firmament, that un-middling stake in the ground two full octaves below middle C.

Normally Ms. Norton’s cellist arm busy evoking those tonalities would have drawn attention, but on this occasion eyes were usually aimed at Mr. Cumming’s.

Props for a Scottish Play

Cummings took the stage wearing a coat, fashionably thin tie and high tops, but after the first song he flung the coat off, revealing a sleeveless black muscle shirt – and keeping the tie. The audience roared its approval, but the artist’s rationale was about more than comfort and bravado.

The actor, true to his roots, sees the Shakespeare in the sappiest of song. As he told The Guardian in 2012,

“Macbeth was the first play I ever read. In fact, I remember my brother Tom, who is six years older than me, coming home from school and telling me about it. He was the one that really got me going.”

And there was more storytelling to the evening: the abusive father, the grandfather whose South Pacific war heroics ended on the losing end of Russian roulette, the condom ad done with Rikki Lake – each worth the retelling.

But those stories are told more fully in his 2014 memoir, or through characters in his 2002 novel, Tommy’s Tale.  Instead this night’s performance sought to cultivate a connection begun with an audience that felt it somehow already knew him.

“I dare do all that may become a man;
Who dares do more, is none.”

I am the actor, the actress, the voter, the politician,
The emigrant and the exile, the criminal that stood in the box,
He who has been famous and he who shall be famous after to-day,
The stammerer, the well-form’d person, the wasted or feeble person.

I am she who adorn’d herself and folded her hair expectantly,
My truant lover has come, and it is dark.

–from “The Sleepers” by Walt Whitman