Can you touch the shape of a song? Can you taste crispness in the wind on a March evening?

This is not a lesson in synesthesia. The answer, according to Pink Martini’s analysis in their multi-lingual album Get Happy, is “Quizás, Quizás, Quizás.”

How can that work, you ask?

Through an insurgency. Point of attack? A tour bus rolled in (to be parked conspicuously in the Landmark lot) with Thomas Lauderdale and his “little orchestra” packed to the gills with its musical nouveau politique. Their mission was to conquer Landmark on their first appearance at the venue. They succeeded.

A man who once considered running for mayor of his native Portland, his influence, verve and charisma have reached name-droppingly far. Once Lauderdale partnered with vocalist-songwriter and Harvard colleague China Forbes in 1995, the current lineup of gifted musicians (yes, all men) backing a strong, striking female vocalist – perhaps the “Pink” in Pink Martini? — was set.

Pink Martini began with their version of Ravel’s Bolero, seemingly arranged with Buenos Aires or Caracas in mind. Men dressed in suits on standup bass, trombone, guitar, violin and piano covered the famous work (see Radiolab’s take on this piece) impeccably well, with Andalusian ornaments on trumpet and four percussionists.

Storm Large, the aforementioned sensuous diva, sang cabaret style but with rivetingly fluid hands and overt hints of modern dance. She fit perfectly into the frame of the band’s hit, “Amado Mio.”

For “Ich dicj lieben,” the lights switched to red, and Ms. Large flung her locks back through the violin solos.

The first big Pink Martini hit “Sympathique” was an overnight sensation in which country?

What public figure is the cousin of co-founder, co-diva China Forbes?

Timothy Nishimoto was pitch-perfect in his version of the lightweight “Donde Estas Yolanda.” (His shiny jacket was singing harmony.)  The band’s performance of the classic “Andalucia” was of studio quality.

The band also performed original music written for Bavo Defurne’s upcoming film Souvenir about a woman who finished second behind Abba in a 1974 song contest, and now works in a meat factory.

Singer Storm Large warned that every Pink Martini concert required a audience to dance in the aisles – “a congo line” — in order to ward off evil spirits. The band’s hit “Brazil” succeeded in drawing raising up most of the audience from their chairs.

Storm Large and Timothy Nishimoto did their amusing cover of the Judy Garland / Barbara Streisand duet “Get happy / Happy days are here again” televised in 1963.

The evening’s highlight was the Turkish folk gem, “Üsküdar’a gider iken,” which the band wanted a few Turks from the audience to help with.  When a couple of self-identified Turks in the balcony demurred, the band jokingly threatened to play Armenian songs instead. The Euro-roots Turkish song that ensued was hand-clapping delight – with a message for every writer-critic: “When I search for my scribe, I found him at my side.”

That’s assuming you could pry your eyes from Storm Large’s fluid gestures and seductive note-making in the Pink.

Others, including Lauderdale himself, points to the extreme eclecticism of the genres the band tackles. True enough, they’ve done Arabic (“Bukra wba’do”), Japanese (“Taya Tan,”) and, on this evening, Turkish (“Üsküdar’a gider İken”) and German (“Ich dich lieben”).  He’s been known to make reference to the U.N., to musical ambassadorship, and other blends to test the palette [sic].

¿Dónde estás, Yolanda?  At the ticket office waiting for a return engagement?

Not at all. Yolanda is sipping the wind and tasting Pink Martini.

It’s the Fantasy in f minor with four hands of tipped in watermelon. It’s Chopin’s Andante Spianato Opus 22, the loneliness with grapefruit and gin. It’s Cuba 1952, or perhaps Long Island, but it is getting late, and there’s so little room on the dance floor.

“The tango was originally from Europe and Africa,” a woman whispers.

You join in. You Get Happy. Que magnifique.

I am a long-legged martini.

I am feeding olives

to the bull inside you.

of all the people

in your corridors.
– Jeffrey McDaniel in “Compulsively Allergic to the Truth” @JeffMcDaniel13

Thomas M. Lauderdale – piano, composition, and China Forbes (not present for this show) composition and vocals.

Unlike some artists and bands, Pink Martini devotes a page of its web site to every performer. On this occasion, his performing roster included, in addition to founder Lauderdale:

Program personally annotated by Thomas Lauderdale after the show: 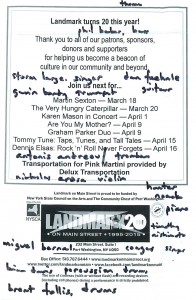