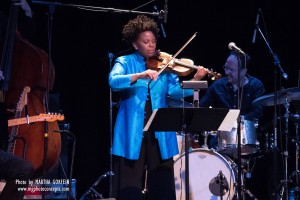 As every preacher knows, a whisper can garner more attention than a shout.

In Grammars of Creation, George Steiner wrote that “The whispers of shared ecstasy are choral.” Violinist Regina Carter’s dynamic range begins at pianissimo and rises up in gently in a seductive wave to forte, and then settles into a memorable space where every voice can be heard.

Signposts on the “Comfort” Journey

The violin is no stranger to the Landmark stage (see a partial list below), but the treble instrument’s voices Regina Carter brought with her on March 6 were as fresh and richly varied as the voices in a Manhattan subway car.

The evening began with jazz-inflected percussion – a style that instantly separated Southern Comfort from other Landmark folk and rock performances. What unfolded was “Honky Tonkin’,” followed by “Hickory Wind,” both arranged by bassist Chris Lightcap. The first phrase out of Ms. Carter’s instrument included “blue” notes – just the sort that intonation-conscious violin teachers often strive to correct.

Thus were the first stops of the Southern Comfort journey visited. Even Marvin Sewell’s electric guitar, the instrument most often invoked to lift Landmark rafters, had its treble controls attenuated.

Trivia Question Which three violinists most influenced the young Carter?

What came next was “Miner’s Child,” a clear storytelling stop on the Southern Comfort tour. Carter’s grandfather was a coal miner born in Georgia who died before she was born.

The evening’s best stop was “Shoo Rye.” As with several subsequent songs, Carter played original field recordings by Alan Lomax and John Wesley Work III so audience could hear the sketch from which the song had been drawn. “Shoo Rye,” sans guitar, featured some sweet violin-accordion unisons, a nicely crafted accordion solo by Wil Holshauser, and violin solos that reminded some listeners of Mark O’Connor’s Appalachian phrasing. The song ended with a drum flourish by Scott Amendola.

Vibrato to Cry For

From her Alabama childhood Sundays, Carter resurrected the hymn “I’m Going Home on the Morning Train.” Excuse the literary license, but Carter’s vibrato, which reflects the realistic variety of human vocal styles more than any other major violinist, is nothing if not prayerful.

A version of the girls’ playground song, “See See Rider,” (not the blues version) was a successful mix of tight arrangement and improvisation. The evening also included “Mandingo Street,” with an African / Caribbean feel, taken from her 1999 Rhythms of the Heart.

Regina Carter employs a full range of violinist tricks: pizzicato, ricochet, sautillé, collé, martelé, and – especially on display in a couple songs — sul ponticello. Forget what you’ve learned about extinguishing violin squeaks and scratches. In a Carter song, you may need them, along with artificial harmonics and offhand quotations from Broadway, “classical” music and nursery rhymes.

And, yes, there was plenty of “whispering,” but the quintet’s occasional forte could be just as memorable. Percussionist Scott Amendola, in particular, playing with an intense squint, delivered some wicked moments that rivalled – in the velocity dimension, even surpassed – some past peak Landmark decibels delivered by the Smithereens and Southside Johnny.

This Southern Comfort tour stop was backed by Marvin Sewell on guitar (and floor synth), Wil Holshauser on accordion, Chris Lightcap on standup bass, and Scott Amendola on percussion. As with many jazz ensembles, the term “backing musicians” hardly applies here. Check out any one of these musicians and you’ll discover composer-arranger credentials to accompany their instrumental skills. Little wonder that Carter herself, in the course of the evening’s performance, would move away from center stage, put down her instrument, and listen attentively.

Regina Carter is an artist who has toured with Wynton Marsalis and Joe Jackson, and recorded with musicians as diverse as Aretha Franklin and Max Roach. Every review has an obligatory mention of Carter’s 2006 MacArthur Foundation Genius Fellowship, but Carter’s instinct for trusting her own ear was established well before then.

Voices from Far, Wide – and Less

It’s the Soundcloud era, as Ben Ratliff suggests in his Every Song Ever book recently reviewed in the NY Times, but many music fans rarely venture outside a customary comfort zone.  Ratcliff wants listeners to try “listening for more.” Reviewer August Kleinzahler adds a variant to this advice: “Listen to less, listen better and more carefully, and repeat.”

Follow this guidance through the Regina Carter repertoire and your North will hear the calling of its long-lost South.

The Violin at Landmark

With idea, sound, gesture, the duende delights in struggling freely with the creator on the edge of the pit. Angel and Muse flee, with violin and compasses, and the duende wounds, and in trying to heal that wound that never heals, lies the strangeness, the inventiveness of a man’s work.

—Federico García Lorca in “Theory and Play of the Duende”

►This review on Medium