“Mashup” is one term that’s been used to describe the eclectic sound of Caravan of Thieves (Facebook | Twitter), but what’s being mashed isn’t so obvious.

The suggested appellation from the Thieves’ web site starts with “Gypsy Swinging Serenading Firebreathing Circus Freaks,” and moves on to invoke Django Reinhardt, Stomp, the Beatles and Tim Burton (“because he’s dark,” they explained when John Platt asked about the Burton in their opening interview at Landmark).

Trivia: What Queen song is Caravan of Thieves known for covering?

But in case that doesn’t do it, I’ll drop a few more expressions into the mashup ring: Frank Vignola, Weird Al Yankovich, Dan Hicks (mentioned in their bio), and Stéphane Grappelli.

The two-headed brain of this act is James “Fuzz” Sangiovanni (Facebook) and Carrie Sangiovanni (Facebook), who’ve been refining this high wire act since meeting in Burlington VT back in 2003. Their surprisingly similar voices are often featured in pleasingly tasteful close blends, as in “I Got You,” a love song they offered up, once Fuzz had caught his breath from a bout of hyperkinetic percussion soloing on a previous number.

Haven’t heard of them? Caravan of Thieves (video features the band’s 2015 lineup) has brightened the stage with the likes of Emmylou Harris, Dan Hicks (remember his hot licks?), and The Decemberists. “Fuzz” has also contributed to Deep Banana Blackout.

The frivolity extended to “Eat You” (“Cause you’ve been sticky with your tricky words / And I would crumble like a humble bird / Now you’re so tender with an ear I can bend and tell you how I feel”) from The Funhouse.

The “gypsy’ part of the band’s self-description was evident in “Monster” from the same album, which featured the truism that “Love made a monster out of me” and some great unison guitar-violin speed-licks. They weren’t present, but you could hear accordion and clarinet parts in the mix somehow.

Less gypsy and more Hot Licks Classic Pop was their knee-slapping version of the Beatles “Girl” and “Being for the Benefit of Mr. Kite.”

Speaking of the mix, kudos to violinist Nicole Scorsone (Facebook) and standup bassist Dan Asher (Facebook), who are the latest to learn some remarkably nontrivial parts. 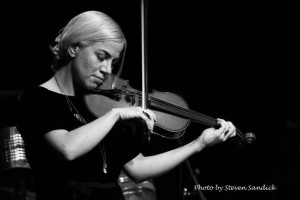 This is a band that ambushes with sneaky talent. When Caravan finished with a brilliant cover of Queen’s “Bohemian Rhapsody” I felt deliciously eaten. If this is Caravan’s dark, it’s the dark of a New Orleans funeral procession.

Yet I, they say, am they—
my bacteria and yeasts,
my father and mother,
grandparents, lovers,
my drivers talking on cell phones,
my subways and bridges,
my thieves, my police
who chase my self night and day.

– Jane Hirshfield, from “My Proteins” 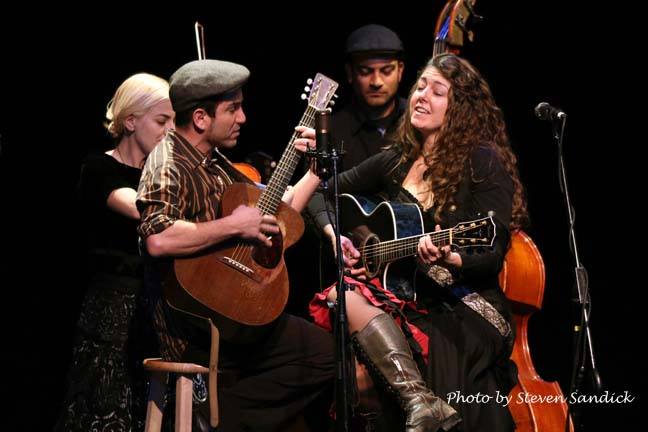