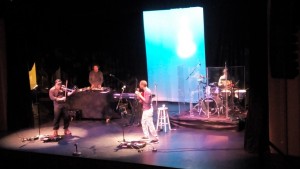 When the term “mashup” came into vogue, its originators probably didn’t envision Black Violin: two creative musicians who could take on the look of their hip-hop musical roots, but exhibit a steadfast allegiance to the classical violin repertoire. Theirs is an allegiance that extends beyond that most violinists working in jazz and blues genres today. Somehow an indelible classical music imprinting occurred with these two at an early age. Later pop culture crosswinds would exert influence but a central “classical” core would remain. This is a remarkable persistence.

Black Violin features a violin and a viola. As legend would have it, a young would-be violinist Wil B was accidentally placed in a viola class, and he’s stuck with it to good effect. The choice freed Kev Marcus to roam the higher octaves with his four-string Yamaha SV. It also allowed Wil B, who handled most of the vocals, to slip now and then behind a Yamaha XS keyboard – which he did several times on this occasion.

The performance began with an introductory flourish that has been used elsewhere: stirring, vaguely familiar (to rock audiences) classical music. Asia and Yes, to name two bands known to employ this method, play an appetizer of Holst, Respighi or Orff before they take the stage. Black Violin borrowed from this technique but felt no need to delay their appearance. They began their evening with a fully charged version of Black Violin’s “Brandenburg.” For the uninitiated, it was immediately forte-clear: not only were the violin and viola to be amplified, but a DJ and some serious percussion were to be part of the familiar Bach phrases. The place rocked from the first measure.

It is worth noting that Black Violin’s tendency to stay near to its classical roots is not superficial. Kev Marcus and Wil B are not content to quote from recognizable classical phrases (e.g., snips from Vivaldi’s Four Seasons) and then to slip unashamedly into a generic pop or hip-hop frame. The musicians, perhaps especially Kev Marcus, seem to have a deep understanding of the violin’s inflections and insinuations. They’re capable of fast runs and arpeggios, but deploy them playfully. It was as if they’d rather let a lyrical whole note in full vibrato do the speaking.

An audience favorite was a soulful cover of Sam Smith’s “Stay with Me,” graced with polite, heartfelt violin ornament. But the evening’s most memorable song was their “The Mission” (2013). The live version the band delivered on this occasion easily bested the recorded one. Starting with a straight-ahead distorted pizzicato riff, the song rapidly built forward momentum strong enough to carry its can-do message of encouragement on some auditory mashup of light sabers and cymbals. 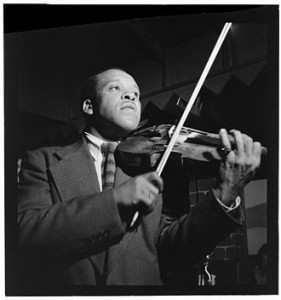 The group is named after the album “Black Violin” (1965) by jazz violinist Stuff Smith. (Give Smith’s “Yesterdays” a listen to hear some of Stuff’s stuff.)  Smith played widely during the swing era, including gigs with Nat King Cole, in a jazz-blues style.

When Nat Stokes was given solo time during an explicitly improvisational song, it too was somehow genre neutral. His solo was as good as that from any rock drummer who has taken the Landmark stage.

The Landmark has hosted many a fine violinist over the years, some of them headliners, such as Eileen Ivers and Immigrant Soul and Natalie MacMaster, and some outstanding backing violinists, such as David Bromberg’s Nate Grower and Entropy Ensemble’s Javier Orman.  But Black Violin’s contribution to the venue’s impressive gallery is unique and memorable.

From the Pitch of Solitude

Violinists seem to want to offset their top-of-the-melody-stack goodness persona with gravitas of a different sort. The reviewer’s own moniker DarkViolin is a clear example, but there’s also Michael Shulman’s homomorph (blackviolin.com).

A snip from the Arthur Crow poem “Night of the Violin” perhaps explains the tendency:

From the pitch of solitude she appears,
dark hair soaking upon winds quiver
violin weeping in the dew of nocturnal sunrise

In the end, the group’s music provided the critical mass. Black Violin has already played for Mr. Obama, appeared on Billboard and VH1 Unplugged shows, and made other significant dangerous liaisons. A new album is due out in September of this year.

Remarkably, the duo announced to the Port Washington audience that it had been their 33rd performance of 2015 in this, the first week of February. The year is young, and Black Violin’s future is a delightful mix of the predictable and the unpredictable. Anything but dark.

Next up at the Landmark is Nicole Atkins, appearing on February 27 as part of the venue’s Roots Rock series.