“Hello. My name is Inigo Montoya. You killed my father. Prepare to die.”

OK, that’s out of the way. Those lines were written by screenwriter William Goldman but made famous by the singer who came to town Friday night.

Instead it was to be Charles Seurat from Sondheim’s Sunday in the Park with George and Che Guevara from Evita.

Lending a little Lincoln Center Appel Room ambiance, the Landmark’s magnificent Steinway grand was shunned in favor of a modest upright, ably manned by longtime Patinkin collaborator Paul Ford, and a few cocktail tables were arranged in front of the stage. 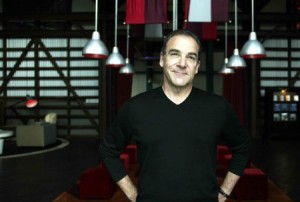 Mandy Pitinkin, courtesy of the artist

When Patinkin emerged amid the buzz of a sellout Landmark crowd (“Where the hell is Port Washington!” he demanded), the actor-singer was dressed in a slim-fit casual black outfit and sneakers. He was carrying two bouquets of flowers, which he purposefully arranged at each end of the stage.

Patinkin is advertised as a tenor, and indeed when he is featured on Jonathan Schwartz radio, his higher register tends to grab attention. But tonight’s range was to be more full-bodied, as he proved right from the opening medley of “The Paramount Don’t Want Me Blues” (from Billy Wilder’s Sunset Boulevard) and Mack & Mabel’s “Movies were Movies.” The latter featured the lyric “One little tramp with a cane,” which Patinkin briefly pantomimed without a trace of the self-conscious.

The evening would not have been possible without Paul Ford, whose animated playing rounded out the Broadway / jazz / American songbook feeling. Ford, who calls himself “a rehearsal pianist,” is noted for his own collaborations with Stephen Sondheim and Paul Gemignani, and wasn’t above chiming in with the occasional vocal accompaniment.

Queen’s megahit “Bohemian Rhapsody” has a lot in common with a Broadway show tune, so this reviewer was not as surprised as my companion to hear Patinkin take on the rock classic. Quoted elsewhere saying that “Rhapsody” “is its own little carousel; its own little play,” Patinkin showed what he had called his “obsessive” sense for how his version of the song ought to go. As it turned out, he didn’t like how one phrase worked out in his first go at it. To the audience, he said, “Talk amongst yourselves,” asked Ford for a redo, and soon they had restarted the song in the vicinity of the presumed trouble spot (a high D, not sung in his signature falsetto, it seemed). This was repeated it three times until Patinkin was satisfied with the result.

“Nothin’ really matters (except that %#%& note),” he adlibbed to the sympathetic audience during the final redo.

Mandy Patinkin’s strongest suit is acting, so lyrics are important, as he explained to BroadwayWorld.com’s Blair Howell in 2012:

I’m an actor first and a singer second. It’s the lyric that interests me the most. Although I’ve never found a good lyric that wasn’t married to a good melody. I enjoy telling stories, but I’m just the mailman.

This probably explains his choice of Patty Griffin’s song “Making Pies,” featuring the line “You could cry or die / Or just make pies all day” and the somber Randy Newman piece, “Snow,” with its somber lament:

It was Sunday in the Park with George where Paul Ford and Patinkin first collaborated, and the song “Sunday” features lyrics designed to stimulate the listener’s inner visual artist:

By the cool, blue, triangular water
On the soft, green, elliptical grass
As we pass through arrangements of shadows
Towards the verticals of trees, forever

As always, the Sondheim scoring contains unanticipated “Hey, listen up!” ever-so-slight disharmonies – “triangular water” of a musical sort. The championing of this dimension of Sondheim work is a good thing.

The duo also gave the audience traditional classics like “Paper Moon” and “Rock-a-bye Baby” but not every song was familiar. The performance included a fast-paced multi-syllabic, memorization-intense “Money Song” from Cabaret. It was reminiscent of Patinkin’s standard-setting version of “And the Money Kept Rollin’ In” from the original cast recording of Evita.

Patinkin and Ford delivered a “patriotic” medley of “Shenandoah,” “Dixie” and other familiar melodies, in the middle of which Patinkin recited most of the Gettysburg Address. He also chose to include the less familiar “Ballad of [John Wilkes] Booth,” with its polite proposition that “every now and then the country goes a little wrong.”

He drew from a wide variety of sources. His energetic version of Randy Newman’s rarely heard Tateh’s theme was from the film Ragtime, whereas his version of Irving Berlin’s songbook classic “What’ll I do” was from the American Songbook’s Common Core.

He ended the evening strongly with an encore featuring with Sondheim’s popular “Being Alive.”

But his earlier stage right walk-off  — after a moving performance of Kurt Weill’s “September” — right hand lightly touching the seated Ford’s shoulder, and followed by a short wistful backward glance at the audience, was the more perfect actor’s exit.

Next up at Landmark on Main Street is a sold out show with Paul Reiser with Vance Gilbert (May 9) and Clint Holmes (May 10), whose show is described as featuring the songs of Cole Porter and Paul Simon.

The Patinkin concert was part of the Dot and Ed Slade series, which next year will feature Norm Lewis. The Landmark’s 2013-2014 Partners in Performing Arts sponsors are Harding Real Estate, the Bank of America, Peter and Jeri Dejana Family foundation, Bethpage Federal Credit Union, Winthrop University Hospital and the Town of North Hempstead.

Mark Underwood writes about knowledge engineering, Big Data security and privacy as @knowlengr and about music and literature as @darkviolin. Also on LinkedIn.

A Marriage That Keeps On Giving: Strunz and Farah at the Boulton

The 260 seat Boulton Center for the Performing Arts has a big heart for veteran musicians. Last Friday evening, an...