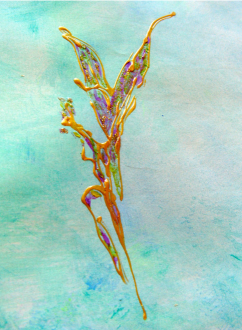 For some artists, talent seems to strike with a broad brush. When multi-instrumentalists like Arturo Sandoval (trumpet, piano) visit the Landmark (April 2013) we are amazed. When actor-singers like Rita Wilson (November 2013) or comedienne-singer Sandra Bernhard (October 2012) come to perform, we marvel. When fiction writer-singers like Roseanne Cash (November 2013) visit, we are at a loss for words.

But as the Landmark audience learned even before Jon Anderson emerged to sing “Sun is Calling” from his long-form piece, Open, last Saturday’s evening would put a different sort of talent on display. Even before Executive Director Sharon Maier-Kennelly introduced him, the room was bathed in the soft sound of birds. The stage was lit by a dozen candles. Anderson’s recorded voice floated quietly, unannounced above the pre-show buzz.

After “Sun,” a lone Anderson offered around 25 songs from his own as well as the Yes catalog. It’s quite a catalog, and deserves the periodic revivals that probably only the aging rockers themselves can deliver.

With Jon Anderson, though, there’s more going on than returning to the FM era and clicking repeat. Through his spare accompaniment (nylon string guitar and the occasional ukulele and e-piano), Anderson’s performances not only range high, but aim high.

Among the artists represented on posters in the Landmark lobby, perhaps that of Nichiren Buddhist Duncan Sheik (March 2010) comes closest to Anderson. Although a generation younger, Sheik also embarked on a career informed by a spiritual sensibility.

But when Anderson performed the Yes favorites “Yours is no Disgrace” and “Sweet Dreams,” the sweetness had a persuasive intensity. So much so that when he sang Paul Simon’s understated “America,” the lyric “Michigan seems like a dream to me now,” seemed a variation of the same interconnected dream. “The moon rose over an open field” could have been a line in Yes’s own “Man in the Moon.”

In its profile of Anderson, a Wikipedia writer’s use of “syncretic” is spot on. More than simply keeping a creditable catalog alive – from his own work as well as Yes — Jon Anderson’s high-register voice aims for a higher plane. A high point of the evening was his nailing of the intonation challenges in “Starship Trooper.’

In “Time and a Word,” Under Heaven’s Door,” “Flight of the Moorglade” and even the breakout “Long Distance Runaround” Anderson showed that Yes songs could be rendered with bare, minimalist accompaniment. At times, his strumming was more ostinato than careful part writing. His sometimes overlooked collaboration with Vangelis, “I’ll Find My Way Home,” received a similar same treatment.

The songs survive this minimalist treatment because the chant-like quality supports a quiet subtext of his lyric-writing. Subtract the prog rock instrumentation, and even “Owner of a Lonely Heart” asks for a new interpretation (perhaps because the words can be clearly heard for the first time).

Jon Anderson is also a painter. In the paintings he hosts at his web site, you’ll see an inescapable resemblance between his visual and songwriting craft. No one religion or sect is at work here. It is not Christian, not Chief Seattle’s sacred omnipresent. It’s an indefinable concoction, some sort of Jon Anderson fusion that demands a special voice to raise up.

When Anderson treated the audience to the Beatles’ “A Day in the Life” and sang the words, “somebody spoke and I went into a dream . . .” it was an inspired, clear-throated version of the original – and a return to that interconnected mystery.

He switched to ukulele for “You’ve Got the Light of Love” (a sing along), and to electric piano for “Close to the Edge,” “Will You Marry Me Again?” and “Heart of the Sunrise.” The latter song was surely dedicated to Ann Latner, at whose urging this Landmark appearance had been arranged.

Anderson’s prowess as a storyteller was also on display. That would include stories of Robert Plant introducing a young Anderson to grass in Newcastle, of seeing Joe Cocker in his Grease Band covering Ray Charles, and – most memorable, of collaborator Vangelis telling Yes’s rock guitar god Steve Howe that guitarists aren’t real musicians. Yet even Anderson’s name-dropping was somehow humble.

He had already performed more than 20 songs, including “Give Love Each Day,” “Going for the One,” “I’ve Seen All Good People” and even “Roundabout” but when he left the stage, the Port Washington audience wanted more. And so three more songs comprised his encore: “State of Independence,” “Wondrous Stories” and “Soon.”

Ours to shape for all time, ours the right

The sun will lead us

Our reason to be here

Ours to shape for all time, ours the right

The sun will lead us

Our reason to be here.”

In a way, Anderson’s paintings are self-portraits. Along with that perfectly preserved ethereal voice, he is sprite, apostle, twinkly-eyed optimist. His mission – irrepressibly one-sided — is steadfast and bright.

That is, to nurture the light he dreams of within every person.

This performance on 30 March 2014 was Jon Anderson’s first appearance at Landmark.