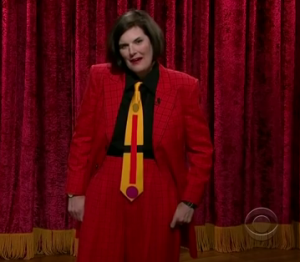 How can one voluble woman cover the topics of teen anger, OCD, mid-life jowls, the quality of American education, the 2008 financial meltdown and disaffected millennials?

— And still have a sold-out crowd laughing like it was watching Charlie Chaplin in Kid Auto Races at Venice for the first time?

She might tell you that a good joke is a valuable social currency. It can go viral. In dessert terms, it’s baklava. Leaves you reeling after a bite or two. An evening with a comedian is different. In dessert terms, as Paula Poundstone herself once explained, it’s a box of pop tarts. It keeps on giving.

Poundstone’s a box of pop tarts. See for yourself in this video:

When Ms. Poundstone appeared at Landmark on Main Street Friday evening, there was something for every flavor of humor.  She seemed to be geographically disoriented by Long Island, otherwise she might have presented herself as maître d’ of a Viennese table of humor:

·         Satire (“My son’s idea of doing Spanish homework is putting a sentence into Google Translate and emailing the result to the teacher. ‘That’s what it’s for, Mom.’”

·         Sentimental (“Nothing could be funnier than one of those old school film strips out of sequence and the teacher’s voice reading over the wrong frame.”)

It was, seemingly, not on the agenda for the evening, but when someone in the audience asked about the occasional panelist about NPR’s Wait, Wait . . . Don’t Tell Me, she felt it necessary to explain that, no, she never intentionally throws a round. The self-confessed TV serial addict (Boardwalk Empire) and frequent TV guest (Late Late Show with Colin Ferguson, CBS Sunday Morning) expressed amazement at radio’s reach.

Poundstone’s connection to “serious” audiences is perhaps not surprising, Her humor seems grounded in issues of the day beyond the expiration date of a box of Pop Tarts. Poundstone is the national spokesman for United for Libraries, a division of the American Library Association. Anyone who’s heard her show wouldn’t be surprised. Books – and any perceived lack of interest in them, especially on the part of young people – are a subject she returned to often throughout the evening. The evening’s themes touched uponTale of Two Cities, then drifted in a Steinbeck direction.  Of Mice and Men, Grapes of Wrath, Travels with Charlie delivered important straight lines.

The book theme also touched on 13 Bankers: The Wall Street Takeover. She had just finished on the day of the show, and it was very much on her mind — much to the consternation of an audience member working for a bank foundation.

In a 2009 interview, Ms. Poundstone attributed her incorporation of audience banter into her show to her poor memory.

The whole ‘Hi. How are you? Where are you from?’ thing with the audience came out of my bad memory. I’d be in a panic and then I’d start saying things I did remember, but I wouldn’t get a response. Now the panic is really setting in. Now I set the table for it every night, and it’s often the most fun part of the night.

On this evening, Poundstone’s first appearance at the Landmark, three audience members were to be singled out to tell a brief story or two. It was here that Poundstone wit excels: Ms. Poundstone was able to extract something funny from a slice of ordinary.

One of these lucky subjects – a woman who had worked for a firm that supplied “parts” to museums – stimulated a riff about art museums (“I get uncomfortable; I’m never sure whether I’ve been looking at the thing long enough”).  Another woman Poundstone sought out had worked for a verbally abusive boss – but the comedienne noticed the woman was a bit acerbic herself. A hilarious improv ensued in which Poundstone simulated a job interview with an abusive manager enthusiastically hiring an equally abusive applicant.

And now for a little puppetry.

She closed out the show by nonchalantly lying on her back – wrinkling a signature paramilitary suit coat — and elevating her feet so they were aimed, laces-up, back at the audience. The foot-puppets then riffed on all the themes extracted from audience members – weaving them into a single narrative that would have satisfied even her childhood ruler-thumping teachers.

But here’s the twist. The puppets’ pantomime that emerges from the Poundstone creative mill may seem to be just novelty and juxtaposition, but those jerky movements amuse precisely because they are so familiar.