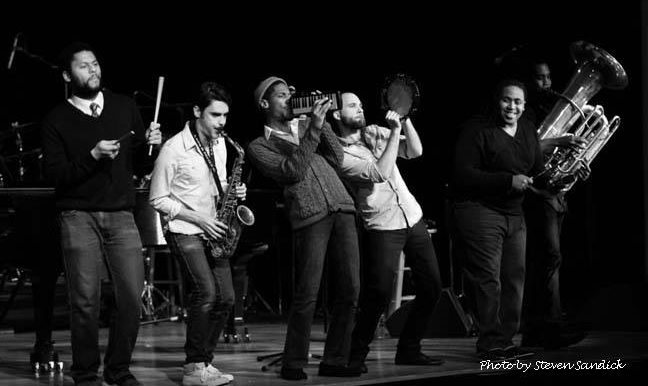 What is “social music”? Is it the name of Silicon Alley startup – some sort of Facebook for music lovers? Nope. Instead it’s the title of Jonathan Batiste’s 2013 album, and also a philosophy.

Not yet 30 years old, the New Orleans-bred musician (@JonBatiste) has already performed in 40 countries. In doing so, he has nurtured a concept for music that he believes combines the best of live performance and audience engagement. In the course of an evening at Landmark, Batiste and cohorts Stay Human, fresh from a successful Carnegie Hall appearance last fall, did their best to socialize a Long Island audience in a Thursday evening appearance at Landmark.

In the course of the evening, Batiste and Stay Human delivered a unique stream of jazz and pop.  Helping to deliver the message was a Stay Human lineup consisting of five capable players: Barry Stephenson (@BassicallyYours) on electric and acoustic bass, Eddie Barbash (@EddieBarbash) on alto sax, Joe Saylor (@JoeSaylorTweets) and Jamison Ross (@Jamison_Ross) on percussion, and Ibanda Ruhumbika (@IbandaTuba) playing tuba and trombone.  This was not an unconventional jazz lineup, yet at times the musicians created the illusion that every musician was playing a percussion instrument.

The audience interpreted this as an open invitation to dance, and many did.

Batiste’s piano style merged his Southern and Juilliard influences.  He could move easily from bombast to subtle classical ornamentation. In a playful version of Joplin’s “The Entertainer” he embellished the theme, stretched and toyed with tempo and quoted related themes when inspiration struck. When he returned to the original tune, he did so as easily as embracing an old friend.

Batiste is also known as an exponent of the melodica, which he calls a harmonaboard. The instrument is a small wind instrument with a 30 or so keys and a sound somewhere between a harmonica and an accordion. When not brushing the ivories, Batiste was free to enjoy the freedom of a vastly smaller instrument.  The harmonaboard allowed the musician a freedom to roam as he pleased, yet had adequate volume and range to “socialize” when needed.

Musicianship in Stay Human was top notch. Special credit goes to saxophonist Barbash, whose riffs were often foundational in the improvisation-heavy tunes. He avoided the “screaming sax” sound by judicious use of rhythm, jazz rests and generously wide skips.

For one of the numbers, drummer Joe Saylor brought out a floor tom for a solo. In the course of the next few minutes, he coaxed just about every possible sound from the drum – Carl Palmer-style — before kicking its tired frame off the stage. (No worries. It was later retrieved and returned to the drum kit.)

The audience was then treated to a clever version of “Rollin’ on the River,” which morphed somehow into Batiste singing a version of “Sunny Side of the Street.”

These witty, yet well-played transitions set the stage for the evening.

Batiste and Stay Human added the Latin teaser “Why You Gotta Be Like That,” and the audience wasn’t sure whether to grin or applaud when the melody from “Killing Me Softly” emerged from an irrepressible rhythm. An adaptation of James Brown’s classic “Get On Up” complete with slap bass and synth orchestra hits had Batiste photographing a now fully energized audience.  “Express Yourself,” also from the Social Music album, pleased the many dancers who had left their seats to shake, rattle and roll.

It wasn’t the heart-pounding audience favorite of the evening, but the group’s performance of a Duke Ellington piece most impressed. The group demonstrated excellent jazz chops, great timing and an excellent understanding of Ellington’s rhythmic use of dissonance in the piece.

Acoustics at the Landmark were tested as never before, and probably never with such easy delight. It wasn’t that Batiste and his crew eschewed electric instruments – not at all. When needed, Batiste did not hesitate to call serious volume forth from electric bass and synthesizer.

Rather it was Batiste’s full exploration of the Landmark’s acoustic nooks and crannies. Early in the performance, the performers made their way down the aisles, engaging listeners along the way. So it was not a complete surprise for Batiste to end the performance from the balcony – showering a grateful audience with notes from above.

The New Orleans processional that followed the local audience home may have been virtual, but it was a full-fledged second line parade of memories.

Barbara Streisand’s fan base is big, diverse and critical. Their collective ear for one of the First Ladies of the...