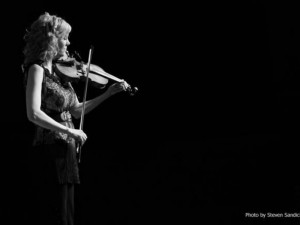 Even before the music began, the Landmark’s Rimsky stage suggested something unusual was afoot. A drum kit was placed stage right front instead of its usual rear center position, and the Landmark’s grand piano opposed it stage left. This left a large area between them open to the audience’s imagination.

In Landmark’s latest World Beat series event on March 16th, a rosin’d-up, furiously bowing fiddle playing dancer (or was it a furiously dancing fiddle player?) in the form of one Natalie MacMaster was about to take up residence in that space.

MacMaster brought to town a brand of regional music and dance that was full of place, but that was also timeless. It was a music both in her blood and grown in the Cape Breton Island soil where she was raised. MacMaster is married to the talented fiddler Donnell Leahy, and is a niece of Buddy “King of the Jigs” MacMaster.

Last season Landmark featured Eileen Ivers, and Saturday’s show featured yet another able female fiddle player – this time with a twist. Even if it hadn’t been revealed that MacMaster is the mother of fivw, including a backstage six-month old, the current season’s performer in this tradition was to reveal herself to be a gifted dancer too. When she wasn’t bowing up a storm, she was an animated tap dancer. In fact, photographer Steven Sandick may have found that “stills” of this performer were an oxymoron.

Guessing that MacMaster’s backing musicians are all Canadians, eh? Certainly. Her band included pianist Mac Morin (also, it turned out, a capable dancer), Nate Douglas on Taylor acoustic and a Strat, bassist Shane Hendrickson on a 5 string Sadowsky made in Long Island City, and Eric Breton covering percussion of one sort or another – sometimes in duets with MacMaster’s feet.

How was the music? So lively, so easy to take in, so musical that one might be fooled into believing that there had been singing that night, too. Instead it was to be an evening of Scotch Cape Breton triplets, arpeggios and comfortably predictable cadences placed in the form of jigs, cogs and reels. By the third number, the performers were already receiving shouts at the end of the song. When MacMaster invited the audience to keep time by clapping, most needed no invitation.

At times, MacMaster was accompanied only by piano. Even if audience members couldn’t find Killiecrankie on a map at the start of a song, they’d soon be keeping the down beat with drummer Breton, who returned to the stage after one such fiddle-piano duet to add folk percussion “bones” to the mix.

MacMaster may have sung and danced her way into Landmark record books by taking the longest on-stage drink of water – and by dancing atop an already-occupied piano bench.Tossing her curly blonde mane at the audience, she accepted a standing ovation, then broadly hinted that she’d return for more. Return with an encore she did, fiddling her wireless way down Landmark aisles, ultimately bringing three young girls up to dance while she played on. Here’s it’s worth mentioning her instrument’s setup. Using a microphone dangled just above the bridge of the violin and attached to a wireless system, this device allowed MacMaster to stay with her violin’s natural sound but to stride across the stage – and beyond – at will.

Usually musicians arrive at Landmark with a portfolio of a few recognizable tunes and tunes less well known. Diehard fans may know many of them, but a musician’s best known songs carry the day. As a result, some nights Landmark listeners must navigate a landscape of both familiar and unfamiliar melodies.

They were somehow tunes we knew all along, and thought we could dance to.

The next Landmark show features the return of Lucy Kaplansky on April 5 8pm. Natalie’s fans will also be interested in a just-added performance by musical cousin Paul Byrom of Celtic Thunder on April 26.